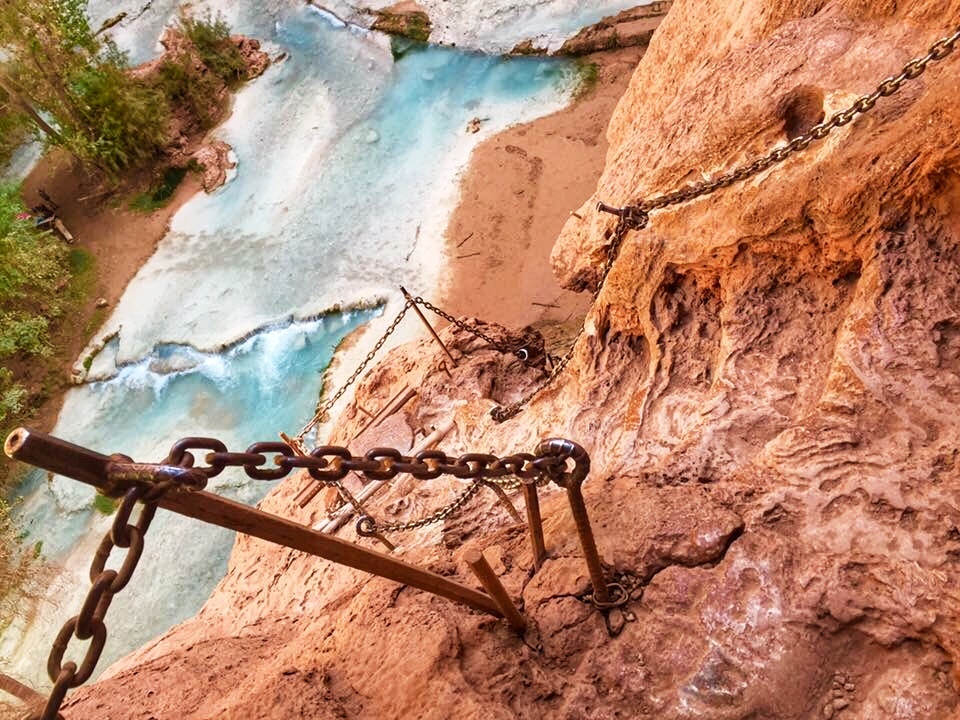 Life was getting a little wonky come September 2016. With a whole new perspective on the education system after some eye opening conversations, books and documentaries I still fell victim to my fear and sent the girls back to school.

To top it off I accepted the nomination to become PTA president…because obviously I am amazing at deflecting when I get super uncomfortable with stepping outside the box. So we commit fully to another school year… but I couldn’t shake this feeling that our family deserved more. I had to embrace some of that discomfort and do something that pushed my limits. With each passing day I was becoming more unhappy with our day to day school life and I was craving adventure!

Go big or Go home, right?!? So when Madelyn at 9 suggested we hike Havasu falls in Arizona after watching a travel channel episode about it, I couldn’t say yes and make her dreams come true fast enough!

Here’s the thing, its not as easy to get to as you may think. *
Little did I know only a limited amount of people are allowed to Hike to these falls each year. The Havasupi tribe have control over this sacred land and release permits on February 1st for the entire year and they typically sell out in hours for the entire year. In my pursuit to figure out how I was going to pull off our biggest adventure yet, I ran across a guide company that already have permits in place and will take groups down. Minimum group size however was 6 people. Which meant I needed to convince 2 other mama’s and their daughters to get super brave with me, invest the time and the money to go on this trip of a lifetime!

I Honestly dont know how I pulled it off but 2 amazing moms with their 9 year old daughters agreed to the expense and the uncertainty of what we were really getting into…and made the trip to AZ with us! Less then 2 months from the time Maddie brought me the idea we left our husbands and younger kiddos behind to have a mommy daughter trip like none other!

10 miles through beautiful red rock and canyons as far as we could see. We started the day at sunrise and came upon the first set of falls at dusk. The girls were amazing! It was warm, and the terrain was not easy to walk on, but they handled themselves like pro hikers. Our guide was fantastic, even preparing a lovely lunch underneath the overhangs of huge boulders in the middle of the day.

The falls were as breathtaking as I had imagined. The color of ice blue Gatorade against the Arizona red rock was unlike anything I had ever seen!

We pitched our own tents, proceeded to inhale dinner and pass out in our 2 person tents.

It was looking over this 200ft drop, with only the assistance of bolts and chains to get us to the bottom( WITH OUR CHILDREN!) That I began to really question my sanity? Why in the world did I think we should do this?!?

After totally surviving and keeping the tears to a minimum we touch ground at the bottom and stood in front of Mooney Falls- one of the most magnificent and powerful waterfalls in the world!
“I dont understand how people believe there is no God” Maddie said standing in awe.

And in that statement I realized she had the biggest lesson she would have on this trip. The best things in life are sometimes the hardest to see and get to. We are called to be a part of the greatness of this world but it comes at a price, it doesn’t come easy.
But she saw the worth and I totally felt a huge parenting win that day!

Havasu Falls is incredible! If you dream of going, you should! There are countless sights online with tips on how to get permits or other ways to experience the falls. We only spent 2 nights down in the canyon-if you have the time : 3 would be ideal, we missed the opportunity to see a few other falls further up the canyon.
The fry bread, if you are lucky enough to catch it open is stupid delicious, our mouths water every time we talk about it. Oh and yes the campground is super clean, I felt safe and everyone we ran across were incredibly friendly.

Maddie and I talk about this trip monthly still almost 2 years later. We felt so brave, so capable. I felt so alive, and passionate about creating more of these moments with our kids.

When the plane landed back in CA I was a changed mom…I had decided I wasn’t going to accept anything less then living the biggest life and building the best relationships with my children.

Havasu remains on my bucket list because I need to experience it with Aaron and the other kids, this one is worth returning to.